Poetry, Memory, and the Arts 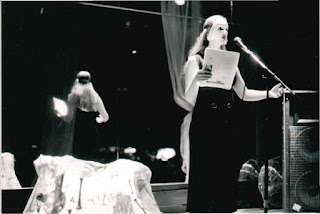 The following essay is a collection of notes written in preparation for the poetry performance “Prophesy,” written and performed by Alifair Skebe at The Fuze Box in Albany, New York on March 19, 2004.

Looking for the Gods

Shepherds of the wilderness, wretched things of shame, mere bellies, we know how to speak many false things as though they were true; but we know, when we will, to utter true things.
The Muses, Hesiod, Theogony.

Mnemosyne, the Greek goddess of memory, begets nine daughters known as The Muses.

Poets can gain admittance to both collective memory and personal memory through a creative process understood as The Muses. When invoked, praised, and worshipped, the muses speak through the body and art of the poet. Through inspiration, a taking in of the breath, their voices move through the body with free access to the mind. However, when the poet tries to capture them to possess them, a kind of madness ensues. The muse is lost; the poet despairs, or worse even, spiritually dies like Hesiod’s fanatical king who falls, dashing his head against a rock.

“I have seen god, as you have,” he added after a time. “I have met him, and the meeting has filled my soul with horror.”
The old woman was quite hidden from him in darkness. But he heard her say in a low, almost toneless voice: “There is no joy in seeing God.”
Pär Lagerkvist, The Sibyl

The gods are ancestors whose history is told through language and poetry, epic and song. Memory begets the muses who inspire the art. To understand their history, one must uncover through backwards ideation: poetry reveals the relationship of the poet to inspiration to the collective memory and personal experience to which it was given birth. Memory forms and shapes itself through the process of invocation, becoming a development of craft, the poiesis of beauty, and the search for truth, or oracle-seeking. While the muse, like the Sybil, may appear to be the prophetess, the priestess, the grace of knowledge, it is the poet who is prophet and historian within the community. In pursuit of truth, the poet will prophesy, to tell the truth of things. As the muses whisper into the ear of a shepherd of the wilderness, can it be one’s own madness that the poet hears? And how might the poet discern the true from the false things expressed as though they were true?

Despite their invective, the poet must actively pursue the muses’ whispers and invite them into the within, because as the Greeks understood, once a memory is produced, it is multi-dimensional, ahistorical, and divine. Memory, as such, exists outside of the mind of the one who experiences, and it enters the world on its own to be invited back to the body as a new thing to be crafted into words. Thusly, the muses carry something of their mother with them. Inside the body, meaning takes shape, accessed directly through vision, a thought-seed planting; this is not meaning derived from self or analytical cognition—this is direct access to memory—implantation. As though adhering to the seed implanted in the womb, the creator-organ.

Access occurs during the acceptance of a thought that exists outside the body entering into the body stem up or stem down. This process is guided through the body listless and processing fluid movement of the energy forces. It is not reducible. It need not be reducible. It is attaching and adhering until the vision clears. Listening. The residue falls away until clarity surfaces in the mind becoming clearer because the resonance of sound and vision are heard louder, sharper, and make themselves more apparent as the process ensues. It is passive reception while actively pursuing the inward.

A poet, as a discerning individual, must receive the outside skeptically rather than passively accepting the totalitarian regime. Memory has the uncanny ability to appear to be based in individual experience as it is being implanted through means outside the body. Time and space alters memory. The present experience alters a memory of the past. Memory appears solid as it fluctuates, as it is being told.

To listen and to decide when to act or how to act is spiritual pursuit. It does not always involve action; not everything heard must be written down, but turned within the body poiesis. Poetry is both spiritual and political, bringing truth to the seekers and seeing truth together. Is the poet, then, one’s own muse? To know when to utter true things. To invoke the old and bring it into the new. Exploring the void, sitting in the cave, alone. Afraid of what may come out of the darkness. The darkness is full of the present. The reality is the situation at hand. Listen. What is calling? For what do you seek? Philosophy? Is knowledge truth? What is wisdom? Knowledge without truth is information. To intend right words on paper. Trying so hard to seek that place which may not appear. Access is sometimes painful. Intension, force, or will resist access.

Recorded history cannot capture the shape or the scope of thought. Thus, there is a limit to what poetry can do, but in its limitation to reveal, there is ever a possibility to become. Thoughts are transferred everyday from body to body to action to what could be known, what is and what is not.

These thoughts are little cords banding the collective memory, the collective communication. We can choose not to listen as we choose not to read everything that passes before the eyes. It does not penetrate the threshold. The threshold keeps others out, but the cord is there should one wish to follow. The cords are everywhere abounding. They sit in space—ethereal blue passing light through each.

To access a cord is to listen, to focus intently on that cord until it resonates in fullness. The intonation becomes clearer in the mind once absorbed. Fruition is the clarity of the access, of the tone. The grace is movement, the flow of the energy and the sound it conveys. A medium performs, does not seek for words to explain the process, simply enacts the process. A poet is no scribe for the gods. 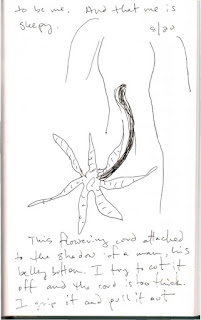 Memory in a Holographic System

To access truth in a linear, historical context can be understood as both future access and past access. But there is no difference in a nonlinear temporal space. If one has accessed the present and experienced in the present a memory of the past, one can then experience a memory of the future. The present is ever continuing and cannot be separated from itself. At first, the listening may seem sporadic as the body empties itself of the patterns of repetition barring the resonance or the internal ear. Slowly then, the process becomes clearer. Then action can follow without willful precedent. A future memory gains access to the present. To send the future memory to another is poetry. To recollect all thoughts and write them as past. In particulars. The totality of the regime. To command the whole scheme is theory is domination. Paper is the willful recipient of ink, and word is dominated in its space. 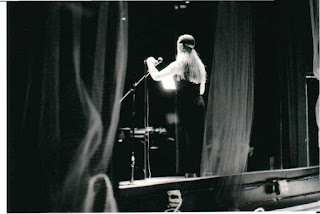 Dressed in the Greek theatrical style imitative of the Apollonian priestess, Alifair Skebe wore a white gauze mask and long black dress to perform “Prophesy.” Beside her on stage stood a small gauze sculpture “The Grotto,” internally lit by a work light and painted in black lettering the text of her poem “Pythian Priestess Addresses Apollo.” Chicken bones hung from the top of the cave, representative of a kind of scrying tool. Audience members were invited to look inside the sculpture and to feel free to touch it. The vibrant, image-driven poems in “Prophesy” explored themes of voice and subjectivity while considering also poetic inspiration as metaphysical suggestion and the Greek’s understanding of the gods’ influence in the role of the poet. In the poems, a persona speaks back to the gods, and in particular, male gods who inhabit, speak for, and otherwise control their human constituency. 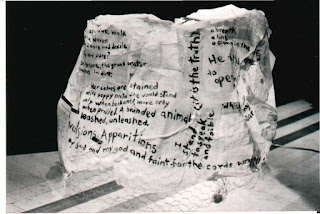 The poems from “Prophesy” are unpublished and part of a larger body of work entitled Eros and Consciousness, A Creation Myth. Based on the concept of thresholds or borders of cultural identity and modern metaphysics, the poems in the book redefine and remythologize in an attempt to create modern myths in the retelling of myths that continue to permeate modern society. The loss of pre-scientific myth has rendered the world meaningless for many people, thusly many turn to fundamentalism for its dogma to make sense of the world. The poems seek to answer the questions: what is spirituality, what is a spiritual journey, what is a prophet, what is intuition, how might one envision a spiritual body, and what is the body?
Email ThisBlogThis!Share to TwitterShare to FacebookShare to Pinterest

Alifair Skebe is a visual artist and author of three books of poetry: Thin Matter (Foothills Publishing 2017), El Agua Es la Sangre de la Tierra/water is the blood of the earth (Finishing Line Press 2008) and Love Letters: Les Cartes Postales (Basilisk Press, 2004). She holds an M.A. from the University of North Texas and a Ph.D. in American Poetry and Poetics from the University at Albany.